I have been living in Colorado for the last 12 years. Two years back I moved from Longmont to North Boulder. I feel very lucky to live near the Lobo trail. This trail is a walking/biking trail that connects Longmont to Boulder and hence the name Lobo. I usually walk there once or sometimes twice a day.

When one enters the trail, there is a dirt road that slopes down. There are tall trees on both sides. There is also a stream of water that runs on the side of the path. It is is the runoff from the East and West Lakes, also referred to as Twin Lakes.  The following picture “Marshy stream in the forest” captures the above description. 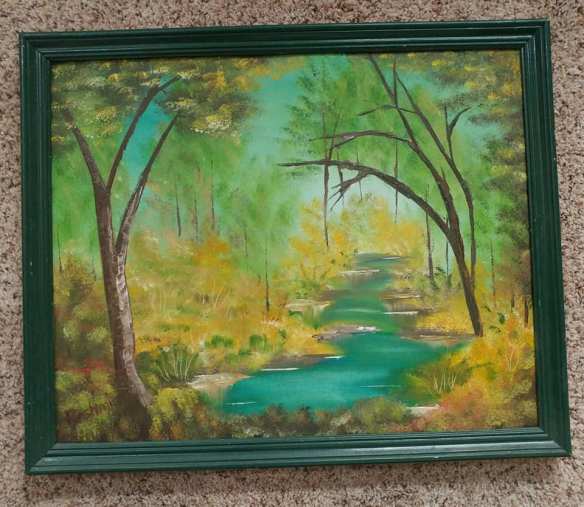 When one walks further down the path, there is a wooden bridge to the right that goes over a gushing stream. the West lake comes up in a few yards from the bridge. The lake appears against a backdrop of mountains. Throughout the year, except in summer, one can see the peaks covered with snow. This picture, “Mountains behind the lake”  captures a glimpse of the majestic Rockies as seen from the banks of the lake. 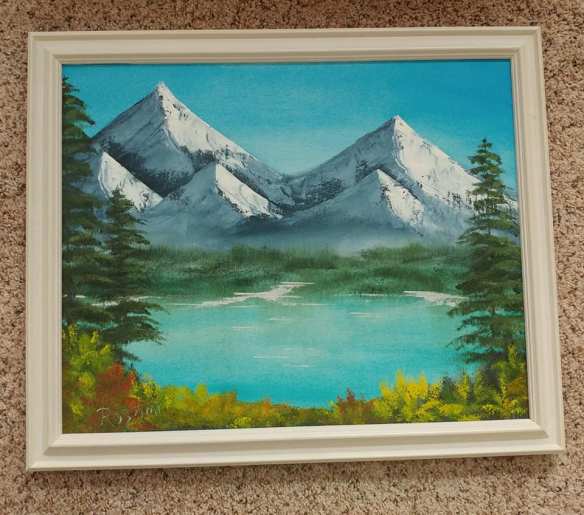 Colorado has some of the most colorful sunsets. The setting sun spreads warm hues of red, orange and pink on the grayish blue wisps in the sky making rainbows.  The picture “Rainbow evening” celebrates a colorful Colorado sunset. 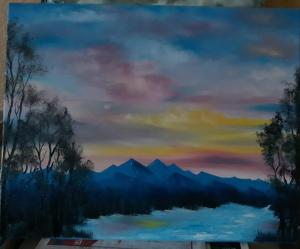 The area around the trail gets quiet and lonely after sundown. Small animals like foxes and coyotes are known to roam around in search of food. I never visited the place at night. As  I mentioned earlier, a gushing stream that looks a few steps of mini waterfalls goes under a wooden bridge near the lakes. I can only imagine how pretty it would look in the moonlight. This picture “Silver stream at night”  depicts my imagination of the stream at night. 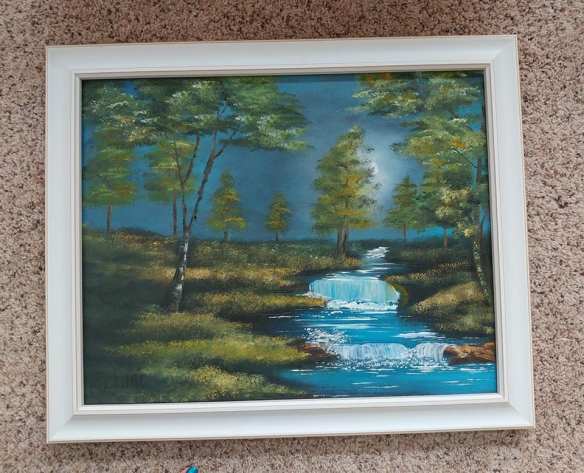 It is said that the moon controls human emotions and creativity. Maybe I am not the only one who finds the full moon most attractive. In this picture, “Moonlit mountains”  the full moon rises in the night sky and spreads a glow over the mountains. The light and shadow create a surreal effect on the stream and branches of a tall tree, nearby. 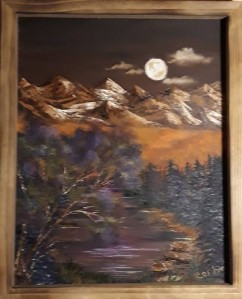 The next picture, “Dreamy branches” breaks away from reality and the natural shapes of the branches transform into a colorful dream. 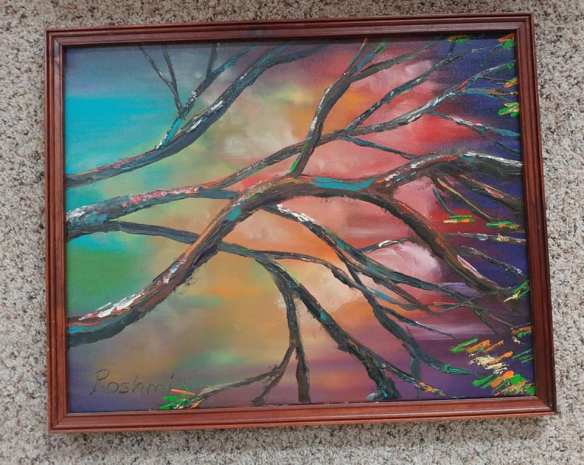 Colorado is famous for Aspen trees with smooth white trunks and round green leaves. In the Fall season, the leaves turn yellow and shimmer in the light breeze. Its golden beauty captures the heart of the onlooker. In winter the leaves fall off and the bare branches stare back through the remarkable black “human eyes”. This picture “Aspen Reflections in winter” is a semi-real interpretation of a row of Aspen trees beside a frozen lake. 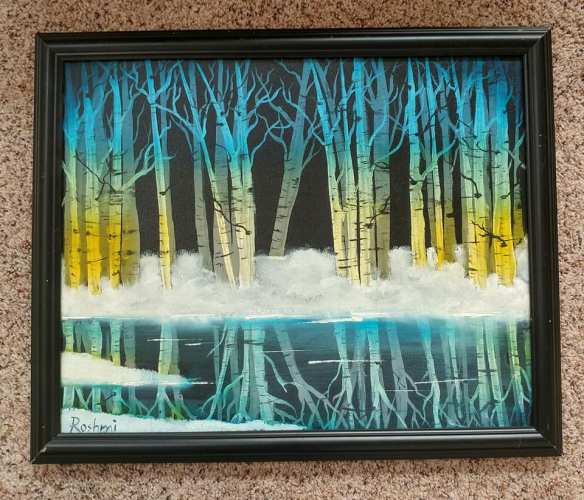 Even though Colorado is known for 300 sunny days in a year. Once in a while, you may have a chance encounter with a “cloudy day”. When haze hides most of the sky, the setting sun is barely able to sneak in a few shafts of golden rays that reflect on the pond and surrounding trees.  Here is the picture of “Golden sunset”.  The metaphor presented here is of the undying hope shining in the darkest hour. 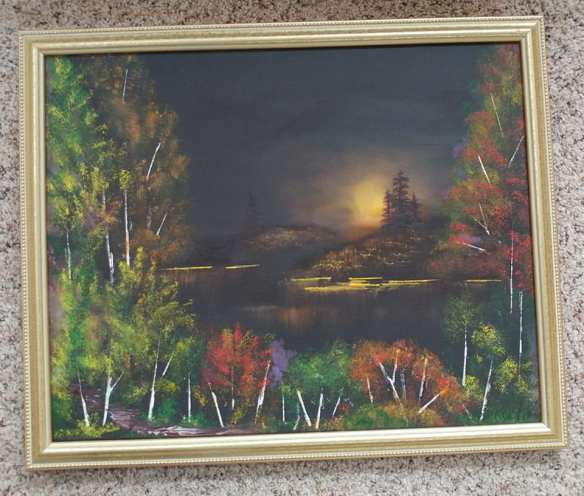 Yes, most of you are reminded of the glowing beacon of a lighthouse that penetrates through the clouds and shows the way to the coveted shore.  Here is “Beacon of Hope” for the weary sailors who toil in the ships and finishing boats in the endless waters. 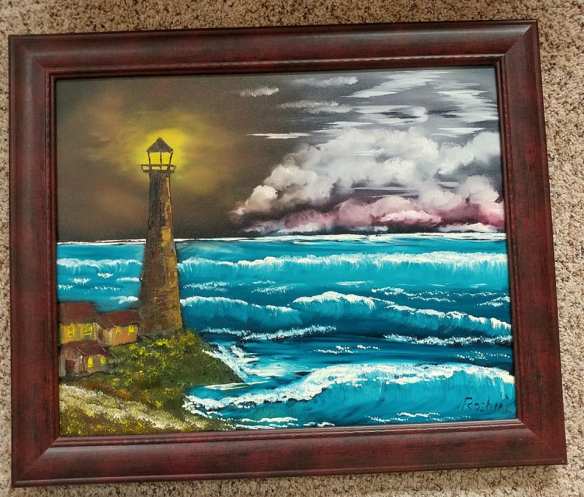 Let me mention here that Colorado, being a landlocked state has a single lighthouse that helps in the navigation of boats on Lake Dillon.  It is a large freshwater reservoir at an elevation of about 9000 ft, popular for boating and sailing. This picture, “Stormy waters” is of a sailboat, with dark clouds gathering on the horizon when the sun is about to retire for the day. 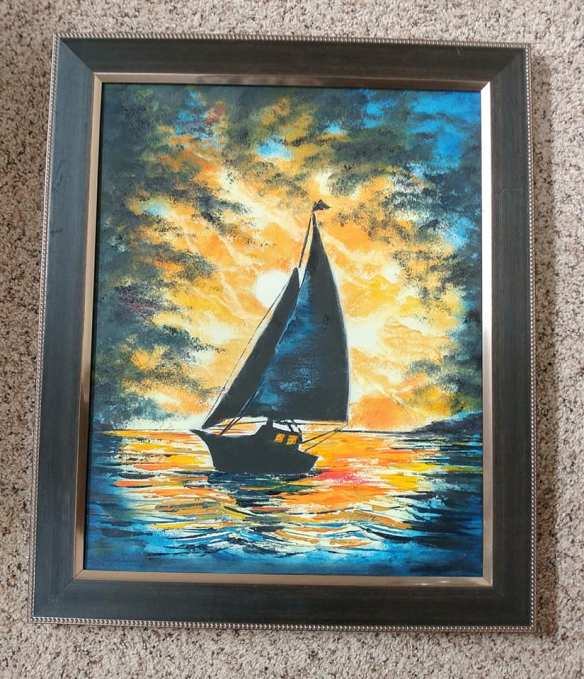 But as all storms calm down eventually, the darkest and most trying times also come to an end. The sun finally rises again. In Colorado, it rises from behind the mountains and spreads colorful light everywhere. Here is “Sunrise behind the Mountain”. 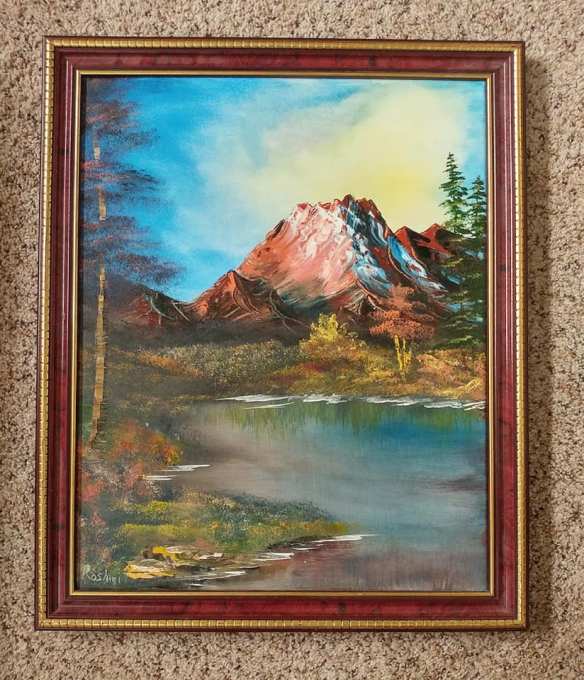